A fabulous gift experiences for those who would like a hands-on lesson in meat and traditional butchery skills. This is an opportunity for our guests to try their hand at light butchery and learn more about where their meat comes from, pick up a new skill and get the most from each cut. We can promise a fun and relaxed day hosted by some of our most experienced and charming butchers. Plus you get to take the substantial joints you have prepped or plentiful of sausages you have made to feast on at home. 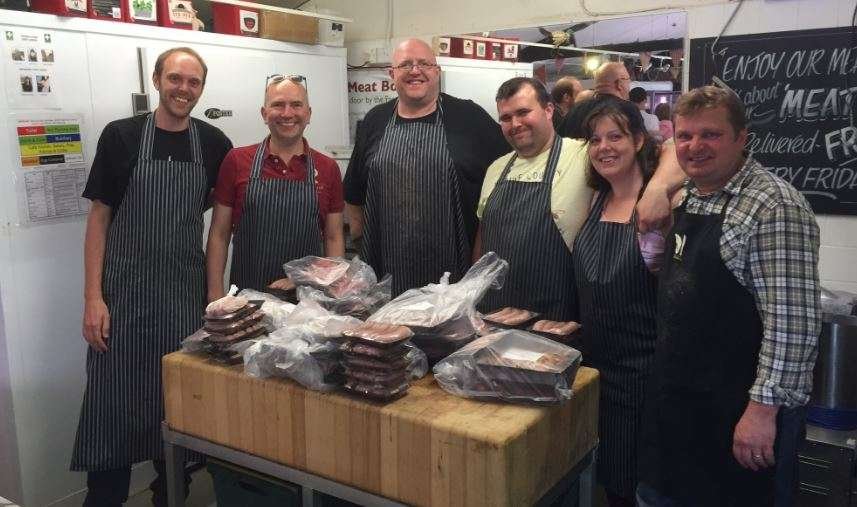 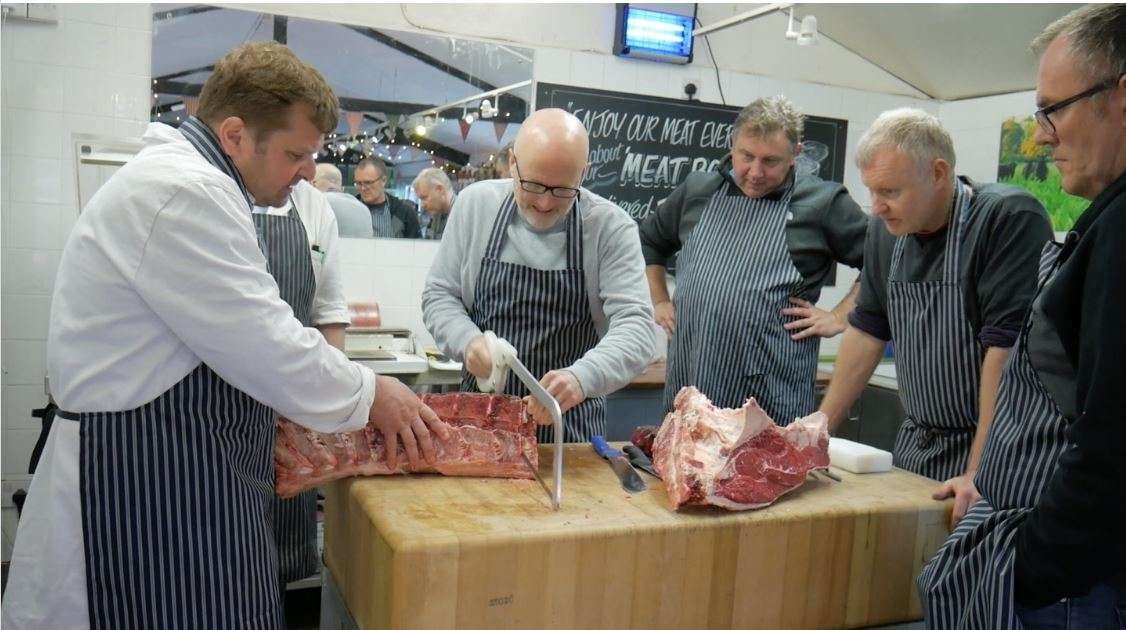 A few weeks back, while me and Ruby were spending time with the chickens down on the farm the old man was taking up his Christmas present - a butchery course with Farm 2 Table.

As a meat-eating family I think it's important to understand where our meat comes from and to try and buy it as responsibly as possible.

A bit of a closet foodie, he was really looking forward to this hands-on experience with father and son team Tony and Louis.

Louis talked about how they'd moved their business from Smithfields market and they now sell produce through the shop and growing online business. He spoke enthusiastically about animal welfare and how their business ethics match the ethos of their suppliers.

After a quick chat,the guys donned their whites and retired to the cold store area, with a variety of pigs and cows hung ready for butchering.

They learnt about how long each animal should be hung - they use 21 days minimum for beef, although pork can basically be butchered straight away.

The team described the local abattoir and their methods for transporting and minimising distress to the livestock.

The course was very hands-on from the beginning and the staff spoke passionately about the art of butchery and articulated what a skilled profession it actually is.

All the necessary health and safety briefings out of the way, they were given half a pig each and set to work under the guidance of butchers Tony and Will, cutting various joins and preparing meat for bacon and sausages.

"I was stuck by how technically skilled they both were with the knives and the speed in which they sharpened their knives constantly was both hypnotic and terrifying! Every butcher has their own individual knives, sharpened to their personal preference."

The course teaches an overview of all the various cuts of meat and equips delegates with the knowledge of what to look for when buying meat, and also what cheap tricks some of the big companies use to fob unsuspecting customers off with the inferior quality cuts.

"I was amazed how meticulous and careful they were to avoid waste when boning the meat."

The pigs return to the farm butchery with the kidney attached, evoking childhood memories of pork chops with deep red kidneys - something you don't see anymore.

Both Tony and his assistant talked continuously about their motivation for putting the course on - they wanted people to understand what goes into butchery and that you don't have to buy over-processed supermarket meat. There are companies who care about the life of the animal and maintain what, in many senses is a dying industry. They're passionate about passing skills on.

There was a discussion about changing fashions in cuts of meat. Time was the pig's head and feet were thrown away because nobody wanted them, but now with high-end restaurants serving trotters and cheeks they've become sought after again.

After a break, they observed Tony butchering one of their cows, showing how to cut the various well-known fillets of beef - sirloin, rump, fillet, chateau briand etc (at £700 worth of meat they were hardly going to let the amateurs loose on this!)

Next it was time to start preparing the pork for sausage making. This is one of the most popular parts of the course, they even put on special hen night sausage making sessions.

Some of the cuts they'd prepared before were fed through a giant mincer before being mixed with rusk and a seasoning of salt and pepper. It's good to know that the butchers counter sell only decent sausages with no ropey bits in! The mixture is kneaded before the fun part commences.

Once the barrel is filled with the mixture, the tricky manoeuvre to attach the sausage skin over the nozzle and using your knee to start the machine you'd better be ready for when the sausage machine starts firing out the meat under high pressure! It's very Generation Game, you need to keep a pace as though unravelling a garden hose at speed. In a matter of a minute you've got 12 ft of sausage.

The super-long sausage is then twisted into sections, and they were taught how to tie them into traditional strings.

"Each butcher seems to have his own personal preferred technique for doing this, and watching them was mesmerising their hands working at 100 mph."

Finally, they returned to the butcher's counter in the shop laden with goods - armfuls of sausages, chops, pork belly, fillet of pork. In the shop a customer had just asked for some burgers so they had the added bonus of learning how to make beef patties for too.

"I was struck by the high level of skill involved. More importantly, I was left with a profound sense of a team of people with a genuine passion about what they're doing and a desire to bring great-tasting, happy meat to the public, and to help people understand that farming can be done in a sustainable and ethical way."

He came away after a long day with loads of packets of sausages and other meat to fill our freezer back home.

Thanks to Tony and the team for a great day. You can find out more about the courses on the Farm 2 Table website or Facebook page.

The courses take place at the Secret Sausage Shop Bishops Stortford, Herts on various dates and run from approximately 10.00 -14.00